In France, 25% to 30% of the turbines are equipped with a gearbox, whose gears may deteriorate over time. Their maintenance is therefore more than crucial to mitigate downtimes, production & revenues losses.

Benefits of a particles counter

The wear of one of the gears may lead to severe damages, until the gearbox became unusable, resulting in the wind turbine being stopped for several months, while waiting for spare parts.

Oil analysis done during the preventive maintenance can be insufficient and when the wind turbine does not have another detector system (like CMS for example – Condition Monitoring System), the installation of a particles counter is more than recommended.

With a particles counter, wear is detected early enough to leave the turbine produce during the order of the spare part. Turbine downtime is reduced to a few days only.

Purchasing and installation costs of this system represent about 5 days of stop, which will be avoided thanks to its installation. The particles counter can be installed on turbines of any age and of any type.

How does a particle counter work?

When a gear is worn, fragments come off and are carried by the coolant (the oil). The counter, located between the gearbox and the filter, detects the particles going through it. Several methods are used: laser, magnetic field, … 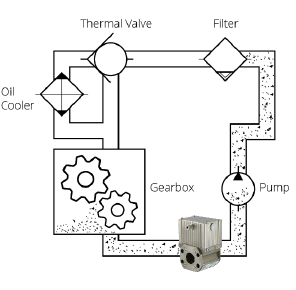 The graph below shows the deterioration of a wind turbine gearbox, according to a particles counter.

Figure 2 Deterioration of a gearbox

Greensolver can advise you if you want to install a particles counter. Do not hesitate to contact us.