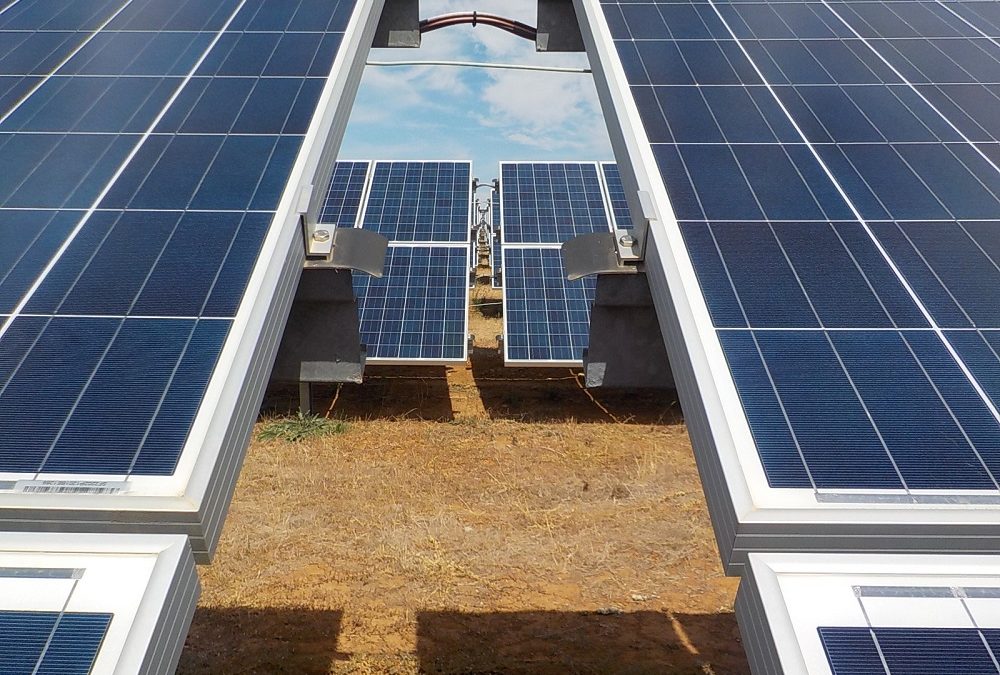 With the cost reduction battle carried out during the last 15 years (mainly due to the massive introduction of the Chinese solar products in the market), solar energy has now become a very competitive energy source. We estimate that prices have reduced by more than 90% over the last 15 years.

As one of the core parts of a PV project, the photovoltaic modules represent between 45 and 55% of the overall costs of a solar project. Likewise, the solar cells represent around 50 – 60% of the cost of the PV modules. Traditional crystalline cells are still the most efficient for solar technology (industrial efficiencies of around 20%). If we take a look to its price evolution, we’ll be able to see that it has drastically reduced: more than 90% in the last 15 years. 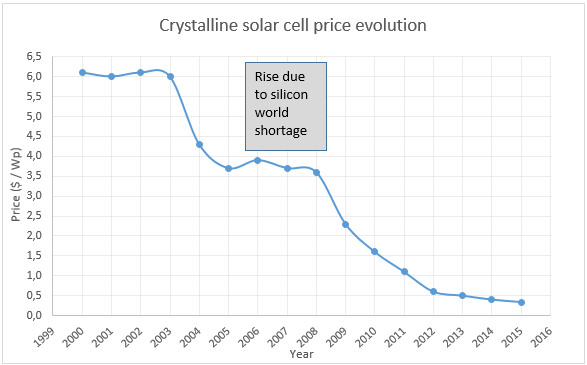 One of the contributions to this price shortfall, was the appearance at commercial level of thin film technology with acceptable efficiency levels, with lower production costs and minimal silicon (raw material of the solar cells) consumption.
Three different types of thin film solar cells were commercialized:

Amorphous-silicon is the most commercially used of these three technologies due to the near manufacturing process to the existing technology, but these kinds of cells have a couple of disadvantages:

Because of these problems, CIGS and CdTe thin film cells were developed to improve the stability and efficiencies. CIGS cells have achieved the highest industrial efficiencies of thin film cells with 18%, CdTe cells have an efficiency of around 15%, and amorphous silicon can reach an efficiency of 14%. In addition, thin film solar cells have lower temperature coefficients than crystalline cells, reducing power losses due to ambient temperature rise during summer months, when achieved production can easily represent 50% of the production of the whole year.

Cost reduction trend is not over!

Nowadays, research trends are looking into the following solar technologies:

Hetero-junction (HJT) solar cells are going to appear very soon in the market and will replace progressively crystalline cells as soon as manufacturing processes are able to adapt in a cost effective way. These solar cells are composed of a thin layer of amorphous silicon over mono crystalline silicon wafers, and industrial efficiencies of around 22% can be achieved with this technology.

Research on organic solar cells is being developed since 2012 to avoid solar technology dependence from silicon. In this sense, Perovskite cells  have become the most attractive option. Made of an organic cation, a metal (usually lead) and an halogen anion (usually chloride or iodide), these solar cells started with efficiencies around 11%, but over the past two years, improvements in engineering has led to significant performance increases with recent devices reaching over 18% and  expecting around 22% within few years. These cells have very low production costs, and are therefore commercially attractive – some start-up companies are looking to sell these types of modules in 2017.

Multi-junction cells, consist of multiple p-n junctions of cells composed of materials capable of absorbing different photon energy levels. When the top junction absorbs higher solar spectrum wavelengths, the bottom junction absorbs the lower ones that were not able to be absorbed by the top junction. These types of solar cells reach an efficiency of around 42%. Nevertheless, due to the fact that they normally use rare metals, they become expensive and their use remains for the moment onto applications which have limited construction space, for instance space applications.

Concentrating (CPV) solar cells, composed by optical lens superposed over small traditional crystalline solar cells, is the solar technology with the highest efficiency reached: between 42% and 48%, depending of the concentration degree over the cell. However, this technology is not as industrially developed as the rest, because the panels must be mounted over 2 axis trackers, to always assure perpendicularity between direct sun light and the lens (being able to reflect and concentrate all the received sun light over the small cell). Because of this constraint, it remains expensive compared to the other solar alternatives. This is why its application is normally limited to locations with high irradiation level (~2000 Wh/m²), where results can be profitable.

Greensolver can help you assess the technology that is best adapted to your project requirements; depending on the location, environmental conditions, project particularities, estimated costs, project warranties, etc…, don’t hesitate to contact us!