The performance of your solar park does not reach your expectations? Unexplainable power losses have been noticed? This can be due to a Potential Induced Degradation (PID). PID effects in a solar farm, can be responsible for losses up to 30% according to TÜV, one of the recommended testing organisation. As solar asset managers since 2008, we explore in this article PID effects, causes and solutions to mitigate its effects.

PID is due to a high potential difference between the semiconductor material (cell) and other part of the module (glass, mount or aluminium frame). This difference creates a leakage current leading to the migration of negative ions which flows out via the aluminium frame, and of positive ions (sodium ions) to the cell surface. This “pollutes” the cell by reducing its photovoltaic effect and leads to power losses.
PID effects are not immediately noticeable and it can take from months to years to have effects. 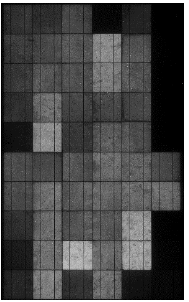 PID is closely linked to environmental factors (humidity, temperature) and configuration of the PV system (grounding, module and cell type).

Mitigation of the PID effect

Depending on its origin, the PID can be reversible or irreversible. When the degradation is caused by electrochemical reactions, the PID will unfortunately be irreversible since it induces film delamination in the PV panel or electro-corrosion.
Anti PID devices can be used in order to reduce or even eliminate PID effects. These systems “regenerate” modules at night by submitting them to a high positive potential when the array voltage falls below a defined threshold. This reverses the ion migration occurring during operation, at daytime. Normal performance can be reached again one month after installation of anti PID boxes. However, if panels have been exposed to PID for a long time, regeneration would last half of the degradation period. The power consumption of the anti PID is low since the applied current to reverse the PID effect is low.

For solar projects at development stage, a way to avoid or at least limit PID occurrence, is to use PID resistant modules. These modules are obtained by using alternative materials (for encapsulated for example) which show a low degradation rate during rough conditions tests performed by independent laboratories. The choice of such modules increases of course the initial project costs.

PID effects will be eliminated over the long-term if changes are made in the design of the solar systems, modules or cells.
If you have any doubt on how your solar asset is performing, Greensolver, independent technical solar assets manager, can be of assistance to analyse and optimise its performances and chase out PID effects.