Serration design or the art of reducing wind farm noise

The noise of a wind turbine is estimated to reach about 55 decibels being at its foot (a car is estimated to be 80 decibels). Though acoustic is still one of the big challenge for the industry and a main risk for projects under development.

In some areas, due to the proximity with locals or their sensitivity, wind installations can be subjected to strong curtailment plans which aims to reduce the noise of the moving blades. Though those curtailment plan are necessary for closed landowners, it often leads to, significant production losses. Noise reduction, as a consequence, has become a main challenge for turbine manufacturers who are all investing in research & development. The latest development in the industry is now offered by most of the wind turbine manufacturers and is called “Serrations”. This barbaric name inherited from the Romans, is used to describe sawtooth add-ons installed on the trailing edge of each blade in order to decrease the sound made by the blade when moving. 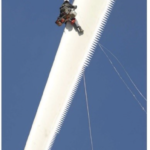 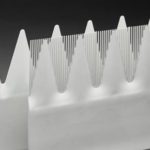 When the turbine is operating, the airflow follows the surface perpendicularly to the blade axis. Near the trailing edge, the boundary layer breaks away from the blade and the flow becomes turbulent. Vortices then appear and create noise. Thanks to serrations, the transition to the blade from the free air-flow is softened, leading to less vortices and lower noise.

Another positive effect of the blade serrations are the changes in the acoustic spectrum. The noise consists of several frequencies at different levels (the level is the “quantity” of sound, quantified in decibels). A low frequency gives a deep noise and a high frequency gives a high-pitched noise. Deep sounds spread further than the others. Serrations change the spectrum by decreasing the low frequencies and increasing the high ones. In other words: the further houses are from the wind farm, the more efficient serrations are.

Serrations have a double impact: they both decrease the overall sound power level of the turbine and restrict the sound spreading. Serrations are now coming as a standard with blades for some turbine manufacturers, but it is still possible to benefit from a retrofit on already operating wind farm.

Greensolver’s technical experts have a deep understanding of local constraints and new technologies, if you have any questions on your wind farm – under development or in operation, do not hesitate to get in touch with our team.